We will make a 21 days and 20 nights trip.
All countries try to register their most precious assets in the UNESCO list. Iran is among the twenty countries with more heritage declared as interest by UNESCO, with twenty enclaves "World Heritage", on this trip we will visit 13 of them.
The most magnificent architecture, the most incredible designs, the most beautiful mosques and the primitive reliefs.
We will visit emblematic places of the Silk Road, the great commercial axis of the ancient world.
We will taste typical dishes like the Dande Kabab or the Beryani and we will taste its pastries, with typical and local sweets such as Kak Kermanshahi.
We will also have the opportunity to enjoy watching the Kurdish Folk Dance and witnessing and hearing a typical Iranian oral narrative workshop.
The most advisable dates to enjoy this experience, due to the climatic conditions, are from March to June and from October to December.


Day 1.
Our trip will start in Tehran. After resting at the hotel, we will visit the Saad Abad Palace in the morning. Then we will go to the mountainous area of Tehran, Darband, where we will take a walk.


Day 2.
We will leave the hotel in the early morning to Kashan (250 km). Upon arrival in Kashan, we will visit highlights of the city such as the Persian Garden of Fin and some of the city's historic mansions. After lunch we will go to Isfahan, one of the most beautiful cities in Iran (220 km from Kashan).


Day 3.
We will visit the first declared World Heritage Site: the Naqsh-e Jahan Square surrounded by four outstanding points such as: the Imam Mosque, the Sheikh Lotfollah Mosque, the Ali Qapu Palace and the Grand Bazaar.
After eating near one of the largest squares in the world, we will head to Hasht Behesht and Chehel Sotun Palace.


Day 4.
On our second day in Isfahan, we will visit the Church of Vank, Menar Jonban and the two most historic bridges: Si-o Se Pol and Khaju. Then it will be time to visit the Mosque of Friday (Jame) of Isfahan, an impressive example of the evolution of the architecture of mosques in more than twelve centuries in Iran.


Day 5.
Today we will continue our journey to one of the most fascinating cities in Iran, Shiraz (480 km). Pasargad, the second enclave declared as World Heritage Site, will cross in our path, as well as the remains of the first Persian garden and the tomb of the most important king of ancient Iran, Cyrus the Great. After lunch, we will return to the hotel preparing to start two amazing days in Shiraz in the morning.


Day 6.
On our first Day in Shiraz we will visit the third place declared World Heritage Site, Persepolis (60 km from Shiraz). The ruins of a glorious monument of the ancient civilization of Persia with a total area of 125,000 square meters. After having lunch and visiting the Naqsh-e Rostam Reliefs, we will visit the Quran Gate, before returning to our hotel in Shiraz.


Day 7.
This second day in Shiraz, we will visit the Karimkhan Citadel and the Vakil Historical Complex, with its bath, mosque and bazaar. We will enjoy our food in the heart of the city, then we will go to the Garden of Narenjestan-e Qavam, the Mosque of Nasir Al-Molk and the Tomb of Hafez.


Day 8.
Today we will leave Shiraz to go to Ahvaz (540 km). We will arrive at the hotel in the afternoon, while we will have enough time to rest and give a walk around the city.


Day 9.
In our only day in the province of Khuzestan, we will visit three enclaves declared World Heritage by UNESCO: the city of Susa (120 km) and visit the Haft Tappeh Museum, then we will go to Choqazanbil and finally to Shushtar (95 km from Ahvaz), where we will visit its amazing and historic hydraulic system.


Day 10.
In the morning we will depart from Ahvaz to Kermanshah (470 km) with a short stop at Dezful, where we will eat and visit highlights, such as a Sassanian bridge from the year 400, crossing the River Dez.


Day 11.
To visit another point declared a World Heritage Site, we will go to the Bisotun Complex (45 km) and visit its magnificent mythical reliefs. Then we will return to Kermanshah to see the area of Taq-e Bostan, with a world-famous relief, as well as Tekyeh Mo'avenol Molk.


Day 12.
Our trip will continue towards Hamedan. On our way we will visit the Temple of Anahita. We will reach the city at midday (185 km), where we will have plenty of time to visit the Tomb of Baba Taher, the inscription of Ganjnameh (treasure book), the Archaeological Complex of Hegmataneh (Ecbatana) and enjoy an excellent meal.


Day 14.
We will leave Hamedan towards Zanjan (300 km) through a beautiful road and on our way we will visit the biggest brick dome of its time, the Dome of Soltanieh. After lunch we will continue towards Zanjan.


Day 15.
Today we will visit an archaeological and spiritual symbol of Iran. In a combination of nature and architecture, Takht-e Soleyman has been home to many Zoroastrian temples throughout different dynasties.


Day 16.
We will leave the hotel in the morning to Tabriz (470 km). After resting in the hotel we will go to Kandovan (55 km from Tabriz), a rocky village still inhabited by people for about 6,000 years, excavated inside the volcanic rocks.


Day 17.
In the last days of our trip, we will visit highlights of the city, such as two places declared World Heritage Sites by UNESCO. We will visit the Tabriz Historical Bazaar, which is one of the most complete examples of traditional trade and the cultural system of Iran. Then we will visit the Museum of the Constitutional Revolution, the Museum of Azerbaijan, the Archaeological Museum of the Iron Age and the Kabud Mosque (Blue). Then we will go around the artificial lake in the afternoon and observe the life of the local people.


Day 18.
After breakfast at the hotel we will go to the northwest corner of the country, Jolfa (140 km from Tabriz) to visit the Armenian Monasteries of Iran, consisting of three buildings of the seventh century: Saint Thaddeus, Saint Esteban and the Chapel of Dzordzor. Later we will return to the hotel and prepare our bags to leave Tabriz in the morning.


Day 19.
Our flight to Tehran will depart in the morning (1 h, 10 m). After arrival at the hotel in Tehran, we will be plenty of free time so that we by ourselves can go trought the streets of the capital of the country before enjoying our farewell dinner in a traditional Iranian restaurant.


Day 20.
This will be the last day of our trip. To discover more about the history of the capital of Iran, we will visit highlights of the city such as the Golestan Palace, the National Museum of Iran and the Museum of Jewels.


Day 21.
At last it will be time to say goodbye to Iran. So in the early morning we will be transferred to the airport to catch our flight back home.


NOTE: When confirming the trip you must pay 30% of your total cost. Payment of the total cost must be made 60 days before the start of the trip.
In cases where the reservation is made with less time in advance, 100% of the payment must be made at the time of confirmation of the same.


Cancelations
- Exclusive responsibility of the Agency:


Â Â . Agency will return to the client all the money received from it (including the penalty for the international flight purchased by the client, duly justified).


Â Â . If any scheduled activity cannot be carried out, due to the exclusive responsibility of the Agency or the supplier of the same, the client will receive a free equivalent compensation of charge and, if this is not possible, its official amount will be returned.


- On request of the client:


. Performed 61 or more days in advance of the date of the trip, the Agency will return the integrity of the money received, the client must assume, if any, the bank charges for reservation, reimbursement and transfer.


. Made between 60 and 46 (b.i) days in advance of the date of travel: the Agency will retain 15% (of the total amount of the trip) as compensation for expenses due to management, reservations, etc. and will return the rest of the money received.


. Made between 45 and 31 (b.i) days in advance of the date of travel: the Agency will retain 35% (of the total amount of the trip) as compensation for expenses due to management, reservations, etc. and will return the rest of the money received.


. Made between 30 and 15 (b.i) days in advance of the date of travel: the Agency will retain 45% (of the total amount of the trip) as compensation for expenses due to management, reservations, etc. and will return the rest of the money received.


. Made between 14 and 8 (b.i) days in advance of the date of travel: the Agency will retain 65% (of the total amount of the trip) as compensation for expenses due to management, reservations, etc. and will return the rest of the money received.


. Made less than 7 days (168 hours) in advance of the start date of the trip (00:00 hours of day 1, Iran time): No amount will be refunded, the Agency will retain 100% (of the total amount) ) as compensation for expenses due to negotiations, reservations, tickets and other non-reimbursable services already committed.

We will have a 8 days and 7 nights trip, following the Alboz...

We will make a 9 days and 8 nights trip. On this trip you will have the... 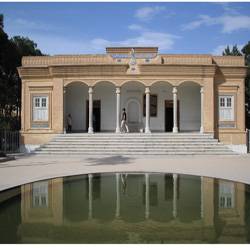 Visiting Iran will give you the opportunity to explore the history of Persia the...

Donât miss the opportunity to meet varied ethnic groups of nomads with their...

The Sahra Desert is a place you really cannot skip when you are visiting Iran....